Within the non-fungible token (NFT) space, there has emerged a plethora of trading cards that aim to bring collectors out of the physical realm and onto the blockchain.  We’ve seen NFT trading cards sell for upwards of $1 million over the past several months, so apparently the craze is catching on.

Meet an individual who goes by the pseudonym SMiRKtheALiEN. SMiRKtheALiEN is the production manager at Core Comics, which has just released a unique trading card series called the “Black Edition Steelcard Series #01.”  Based off of their upcoming graphic novel ‘Artifice Re-Animate,” the animated, intricately designed trading cards feature four unique characters—Alyria, Benjyn, Kayn and Dany currently available on Rarible.

Creating the unique trading cards was not an easy task as SMiRKtheALiEN explains to NFTsDaily.com: “Our NFT character SteelCards start with the artwork, hand-drawn and traditionally inked By VicKingArts. From there the artwork is scanned, digitized and handed off to be colored by Barbusco Studios. The completed piece is then animated and the final design rendered, becoming the completed card. It’s a complex process, made even more challenging as the majority of Core Comics’ team members are located in different countries from one another. But it makes for a fascinating creative endeavor to embark upon.”

Core Comics wanted to create collectible cards that depicted each of the characters with their own backgrounds, personalities, and unfolding journeys—all based on the Artifice Re-Animate fully realized universe that includes numerous character stories that overlap and intertwine with one another.

In the first book, the audience is introduced to the protagonist Dany, who is washed ashore the dystopian hellscape of Velrona after experiencing a disastrous incident at sea.  The story continues with Dany being exposed to the world’s deeper mysteries, ancient secrets and the insanity of unknown hyper-technologically advanced civilizations as forces beyond his comprehension propel him on a collision course towards the ever-blurring grey areas between the past and the future.

“Our intention is to raise funding prior to the launch of Artifice Re-Animate’s physical release via Indiegogo; establishing ourselves within the NFT market and allowing us to continue creating further design iterations of our cards alongside producing the full NFT version of the comic book,” says SMiRKtheALiEN.

Ultimately Core Comics plans to launch their Indiegogo campaign this coming week, with a launch event scheduled for March 19th.  That event will be streamed at CORE HQ in Decentraland (in the metaverse) for the NFT market, while also being streamed on YouTube for the more traditional comic book market. 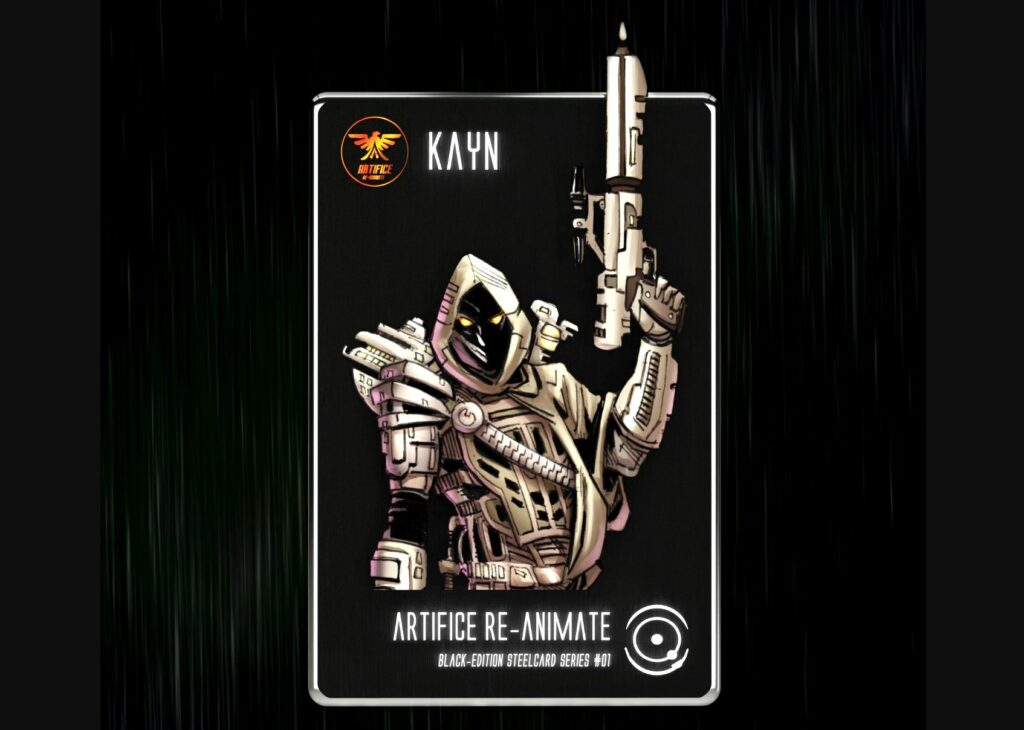 As we gain momentum from physical sales, creating an NFT based version of the book is our next priority,” Core Comics explains.  “Once the physical book and the NFT version are completed, the physical book production moves into the fulfilment and distribution phase. We are truly passionate about blurring the lines between the digital world, the real world and the artistic world. We’ve got our fingers crossed that success in the early stages will be achieved. If so, we will be going full speed ahead while maintaining the quality of our NFT production and delivering on our promises of blockchain and physical comic book creation.”

These NFT trading cards could be the start of something quite amazing.