The NFT community is growing at a rapid rate, but so too is the rate at which collaborative minds come together within that community.

Just yesterday, Gifdead, Co-Founder of Niftycastle.io, woke up and reached for his phone like we all do. He started scrolling through his social feed when a post from Henric Aryee, also known as @ten_second_artist, captured his attention. He searched for more artwork and was captivated by what he saw, so he messaged Aryee on several platforms trying desperately to get in touch. When he did, he immediately offered Aryee an artist interview and spotlight on Nifty Castle’s platform.

“I don’t know anything about Aryee other than I love his artwork. He could be a serial killer for all I know,” Gifdead laughed.

Nifty Castle is a fun and inclusive space for artists to explore their creative potential in NFTs as a new medium. Aryee delayed his own drop party that was supposed to happen yesterday, to collaborate with Nifty Castle for their new drop party for “Coinye” live on Clubhouse.

“I literally just found him, and was like, ‘Dude, let’s get together I love your work,’ and I’m super stoked he agreed to do it,” said Aryee.

This all happened because of a burgeoning creative movement characterized by its innovation, diversity, and influence in the NFT marketplace. The creative class in cryptocurrency is all about curation. 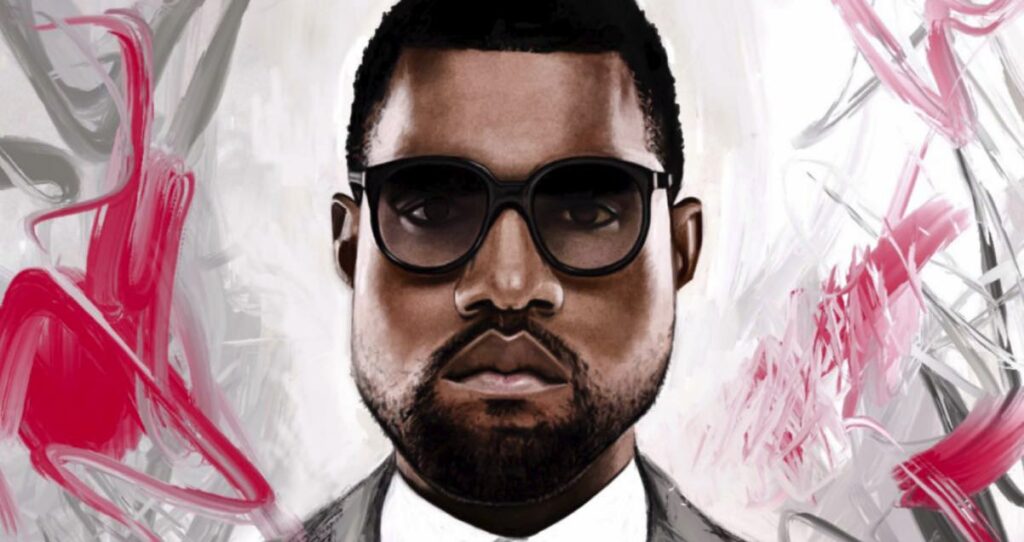 The drop, entitled, “Coinye” is a beat Aryee threw together with loops by Allygold and Beatzilla. It’s the first piece in his new series of Crypto-Caricatures with unlockable content that includes a link to a still image of the painting.

Aryee started painting digitally when he was at Parsons School of Design, and has worked as an illustrator and graphic designer for 15 years. He kept creating personal art on the side, because his dream ambition was to discover a way to flip his personal work into a full-time career as a working artist. He ventured into cryptocurrency as an investment in assets before he ever knew about crypto art, and when he discovered NFTs a few months ago, he saw a gateway to more cryptocurrency without trading, mining or other means.

“Coinye” is about celebrity worship. “The people that we elevate to a level of Gods, I suppose, or saints in society, Aryee pondered. “I’m questioning why we do that. Should we do that? Do they deserve that? So many people believe in them, but what do they believe in? We don’t know, because we really don’t know these people.”

Aryee, who was born and raised in Zimbabwe and Zambia and currently lives in Stockholm, has traveled extensively because his father worked for the United Nations. Having lived in several different countries and never in the same place for more than a few years at a time, I asked him if his nomadic lifestyle influenced his art.

“I have a lot of different influences, and I’m really influenced by classical painting, yet I like to combine that with all kinds of different movements through art history; many art styles into one piece,” said Aryee. “If I can make a Renaissance painter co-exist with a Cy Twombly or a Basquiat on the same canvas, I’m really happy. That’s when I think my work is at it’s best. I think that’s my signature.”

Reconnecting with all of his personal art over the years, Aryee was looking at some of his old caricatures and pieces he created at home for himself that he had never published or exhibited anywhere. He considered minting them to the blockchain as-is, but would rather expand his point of view though his artistic version of social commentary.

“This whole NFT thing gives you a real opportunity, a whole new opportunity to do something new. Technology gives you new tools to work with. I want to update my caricatures for the NFT space.”

The name Ten Second Artist came from a period when he almost rejected his lifelong pursuit of creating hyper-realistic and time-consuming paintings, in favor of more spontaneous and immediate artwork. “In time, I came to the realization that I produce my best work when I integrate these two opposing aesthetics, but the name was so catchy that it just stuck!”