8-bit art is apparently the new hot thing on the internet.  With the recent record-breaking sales of the various 8-bit CryptoPunks characters, which have topped the $7.5 million mark, NFT (non-fungible tokens) art in general have become a topic worth talking about.

With the rise of the Larva Labs’ CryptoPunks, we’ve also seen a rise in numerous artists trying to replicate the success that Larva Labs has had.  One such artist, who simply goes by the moniker ‘The Pixel Figures Person,’ has merged culture, history and 80s-style 8-bit graphics into creating what he hopes is the next hot collectible in the NFT space.  His creation?  Meet the ‘Pixel Figures!‘

“The Pixel Figures are an amalgam of nostalgia meets a young gamer grown up,” the artist tells NFTsDaily.com.  “My childhood was full of little pixelated characters and sprites that to me was just magically moving around the screen at my whim. Looking back on this, I am amazed at the details that were created in 8 bit, 16 bit, and 32 bit games. If you spend any time playing the original Secret of Mana or Final Fantasy 6, those are godlike tiered early pixel art creations that I fell in love with and still could jump into playing to this day. That artwork is what initially inspired me.”

Having been creating his own personalized-style pixel art of his favorite characters for close to a decade, it was a no brainer for this artist to bring some of his creations to the blockchain, via NFTs.  The pandemic gave him the chance to gather a deeper understanding of NFTs and upload 285 of his approximate 385 Pixel Figures characters to the OpenSea marketplace. 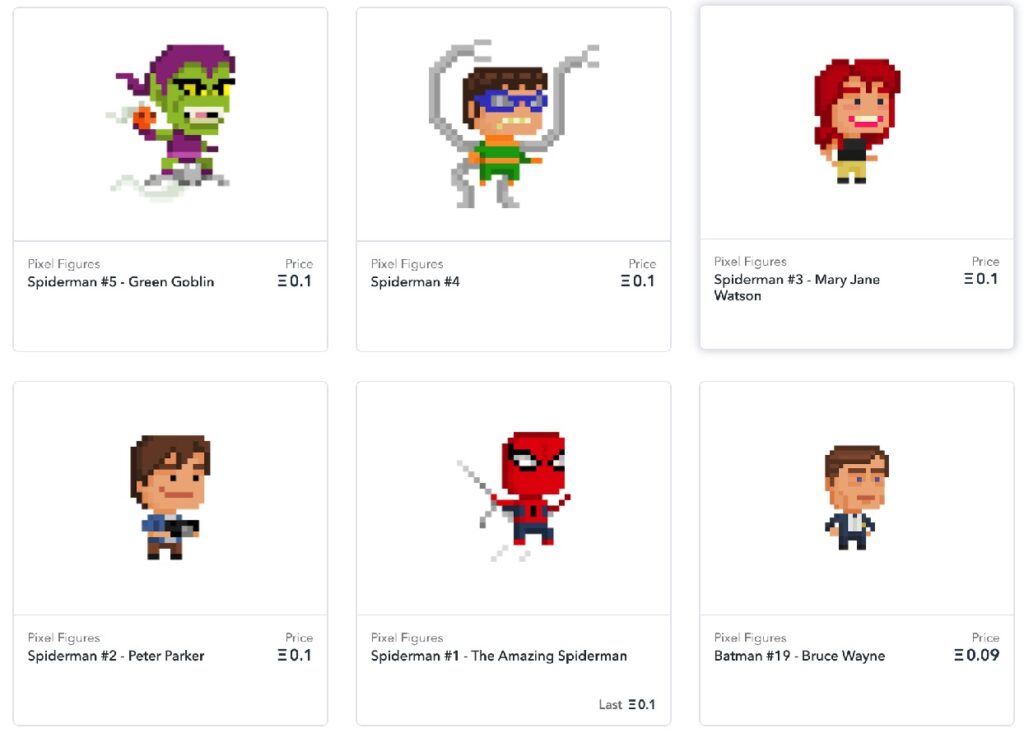 “What I like most about NFTs right now is it has opened the door to so many artists who can now get their pieces out into the world and have people showcase interest not only through conversations in the community but by purchasing the items directly from the creator,” this artist tells us.  “It allows collectors more access to new art too.”

The figures, many of which are animated, include characters from pop culture, video games, TV, and world history.  Just a handful of examples are characters from The Beatles, Doctor Who, Star Wars,  Jedi Council, Punch-Out, Street Fighter, Alice in Wonderland, Snow White, The Big Bang Theory and even the U.S. Presidents.

Alright finally finished getting the 46 US Presidents as Pixel Figures up in my collection on #opensea #NFT #digitalart #ETH #cryptoart pic.twitter.com/TdtWcBDYMq

Once all 385-or-so Pixel Figures are uploaded and made available for purchase on OpenSea, this artist plans to create a few other figure sets to fill out some of the gaps that he believes still remain in his phenomenal collection.  There are still many figures available from this collection, all exclusively available on OpenSea.