Mike Winkelmann (AKA Beeple) has become a digital art icon in every sense of the word over the past decade.  Artists everywhere look up to him for inspiration and encouragement for their own projects.  Just last month Beeple minted a non-fungible token (NFT), entitled “Crossroads.”  It sold for a whopping $6.6 million on Nifty Gateway.

With NFTs suddenly becoming a sensation within the digital art space, we’ve been seeing a lot of unique NFT creations and collections from independent artists honoring Beeple for the contributions he has made to the community.

One such collection is the Beeple-Man action figure collection created by UK-based artist Phil Roberts.

“I like sci-fi TV shows and film and that’s where most of my inspiration comes from, as well as peers in my community who create amazing work that inspires me to be better,” Roberts tells NFTsDaily.com. “Beeple is at the top of that list of inspiring artists; his relentless ethic of ‘Just sit down and do your work’ has been a driving force for the daily render movement on Instagram for the past 5 years. He manages to get humor and topically issues into his work, as well as being technically brilliant and riddled with compositional expertise.”

Roberts, being new to NFTs (like most artists in the space), learned about non-fungible tokens through a Facebook group started by his friends.  He indulged himself in as much information as he could on the subject and came up with an idea that he thought would be a homage to Beeple.

Using Cinema 4D, Octane Render and Photoshop, Roberts created the first edition of “Beeple-Man – Revenge of the Everydays” which is a play on “Star Wars – Return of the Jedi.”

“I like to poke fun at topical subjects like Beeple, and I thought it would be rather ironic to subject him to the same kind of artwork,” explained Roberts.

Upon the completion of his work, Roberts sent a copy to Beeple himself who loved the 3D rendering so much that he tweeted it to his 230,000+ followers.

“All of a sudden my phone lit up with a million messages, and all 100 sold within a matter of minutes,” said Roberts. “Since then I’ve minted and sold 100 of my second installment, ‘Christie’s edition’ and have just recently minted the third edition ‘Retirement Mike’.” 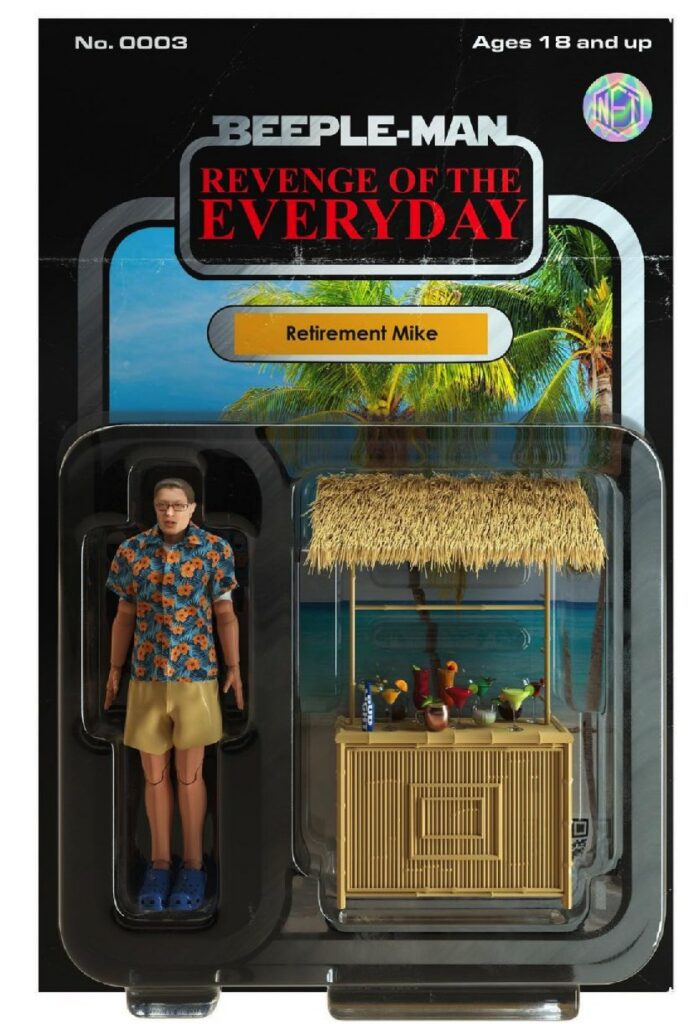 On top of creating the amazing digital figures, Roberts also created a homage to the 80s action figure with a commercial advertising Beeple-Man and Beepleverse.  This was heavily influenced by the Kenner and Mattel toy commercials from that time period.

“NFTs have opened up so many doors for me in a very short space of time, and also connected me to so many artists that I didn’t know — that I definitely should have,” says Roberts. “I’d like to thank everyone who has purchased one of my NFTs.  It’s supporting myself, as well as up and coming artists coming into the scene that I then re-invest that capital into, so that it comes full circle.”

Roberts says he has 2 huge NFT projects coming in the next few weeks.  Although he can’t talk about them just yet, he encourages everyone to keep a lookout!  You can see Roberts’ creations on Rarible and Foundation.