Anyone who grew up in the 80s or 90s is probably very familiar with the Garbage Pail Kids trading card series.  The grotesque characters were all the rage for boys and girls who were tired of hearing their parents tell them that their social etiquette was not up to par.

While the Garbage Pail Kids brand is still firing on all cylinders nearly 40 years later,  there has also been some competition arriving onto the scene.

One such brand is the CryptoHashGeeks, an NFT trading card series that just minted its first card, featuring none-other than the “Wrinkle Floss Twins,” based on the well-known Winklevoss Twins, Cameron and Tyler. 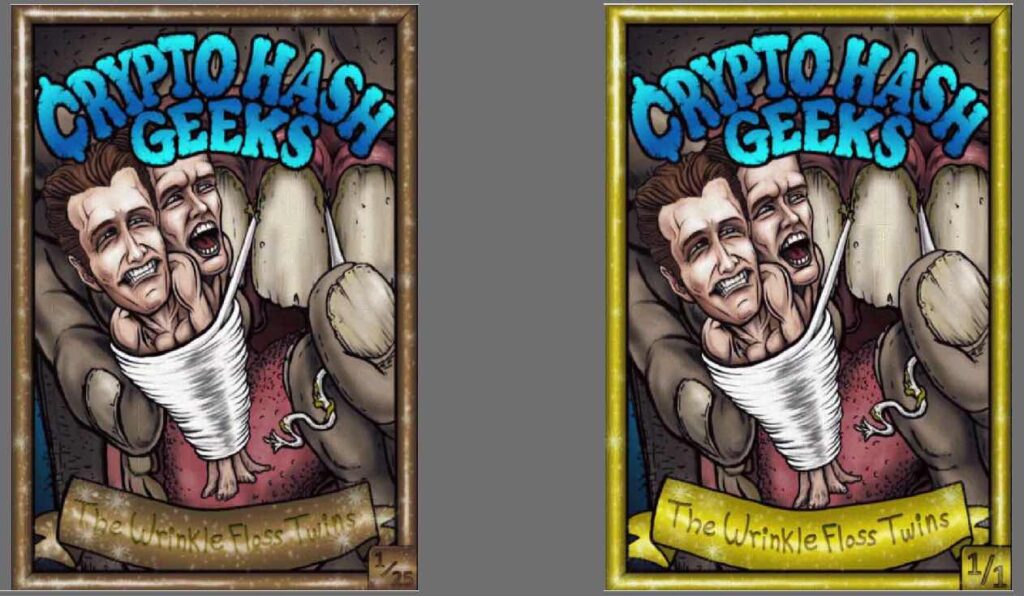 “The Wrinkle Floss Twins Card #01 is an animated card featuring the scum-fighting action of the Wrinkle Floss Twins, as they cleanse the financial system of fiat, bringing about change and decoupling the world’s finances from the scummy bankers of yesteryear,” says Brian Krassenstein. “Each card will have a Bronze (Limited to 25) Silver (Limited to 5) and Gold (1 of 1) version. This is the Bronze version.”

The Gold version of the card is currently on auction at OpenSea.  That auction ends this evening (March 29, 2021).  The silver and bronze versions are available in limited quantity on both Rarible and OpenSea.

The CryptoHashGeeks formed out of a 3-way collaboration between San Diego-based artist Michael Mansueto, and NFTsDaily.com’s co-founders Brian and Eddie Krassenstein. Mansueto is known for his work on The Hunger Games: Mockingjay – Part 2 (2015), The Amazing Spider-Man (2012) and Man of Steel (2013).  He teams with early Bitcoin adopters Brian and Eddie Krassenstein who did work with internet-based TV show “A Fowl American”.

The animated trading card series’ goal is to parody individuals within the crypto space.

“The origins of Bitcoin and ultimately other cryptocurrencies, leading up to the advent of NFTs has inspired this collaboration to immortalize the historic evolution of the space,” Mansueto says.  “This limited, character-driven series will amuse you and intrigue you to a point where you can not look away.”