Pussy Riot has Launched March 20, 2021, a Political NFT ART AWARD. Starting from the launch until Friday, March 26, 2021, artists can submit their political art until the deadlines. Because of the overwhelming demand from artists to get help on NFT platforms, the award creates light on political art in this growing crypto art space.

On Saturday, March 27, 2021, the three winners  will be invited to be featured on the foundations platform.

Nadya Tolokonnikova says: “We’re committed to solidarity and supporting activist art. We made this award because we want to see more crypto artworks on political and social issues. We want activist art to succeed, and we’ll do all that’s in our power to elevate it. Female and queer artists will enjoy privileges in this award, but everyone is welcome to apply”.

Here is a little origin story on Pussy Riot, a protest group for all those living under a rock. In August of 2011, Russian Feminist Nadezhda Tolokennikova and Maria Alyokjina formed a group opposing Russian President Vladimir Putin and his policies.

The groups performed several protest performances. The most known is the stage performance in Moscow’s Cathedral of Christ the Savior on February 21, 2012. These performances led group members Nadezhda Tolokennikova and Maria Alyokjina to be arrested and sentenced to two years in prison.

The video, Panic Attack, is a result of a person fighting with being overwhelmed by panic disorder.

Tolokonnikova explained that after serving two years in a labor camp, she is still struggling with mental health issues. “Trauma, fear, and insecurity never entirely go away, causing depression episodes and profound anxiety.” 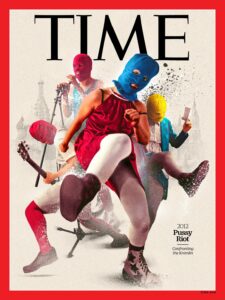 “PANIC ATTACK” was born due to me staring at the wall for 24 hours in the middle of the pandemic, feeling 100% helpless. I was trying to write something uplifting to encourage people to get through the tough times. But I was failing and failing. Magically, at the second I allowed myself to be honest and write about the despair I was experiencing, I wrote the track in like half an hour.

Depression is a plague of the 21st century, and it tells me that there’s something broken in the way we treat each other. The video ‘PANIC ATTACK’ reflects human beings’ objectification, loneliness, and disconnection from the environment that causes us to feel small and powerless. And it’s us who caused it with our own hands – that’s why at the end of the video, I’m fighting with my clone.”

Panic Attack is available in four NFTs for collectors to purchase on Foundation.

The proceeds will fund Pussy Riot’s art and the shelter for domestic violence victims in Russia that they’ve supported since April 2020. 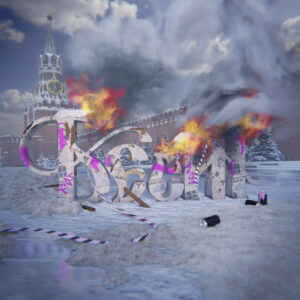 The protest art group’s ten-year anniversary is this year, and their debut studio album RAGE is coming later this year. This comes as a 2021 campaign for the release of the people arrested for political reasons this year. Pussy Riot has issued an urgent call to action called “RAGE.”